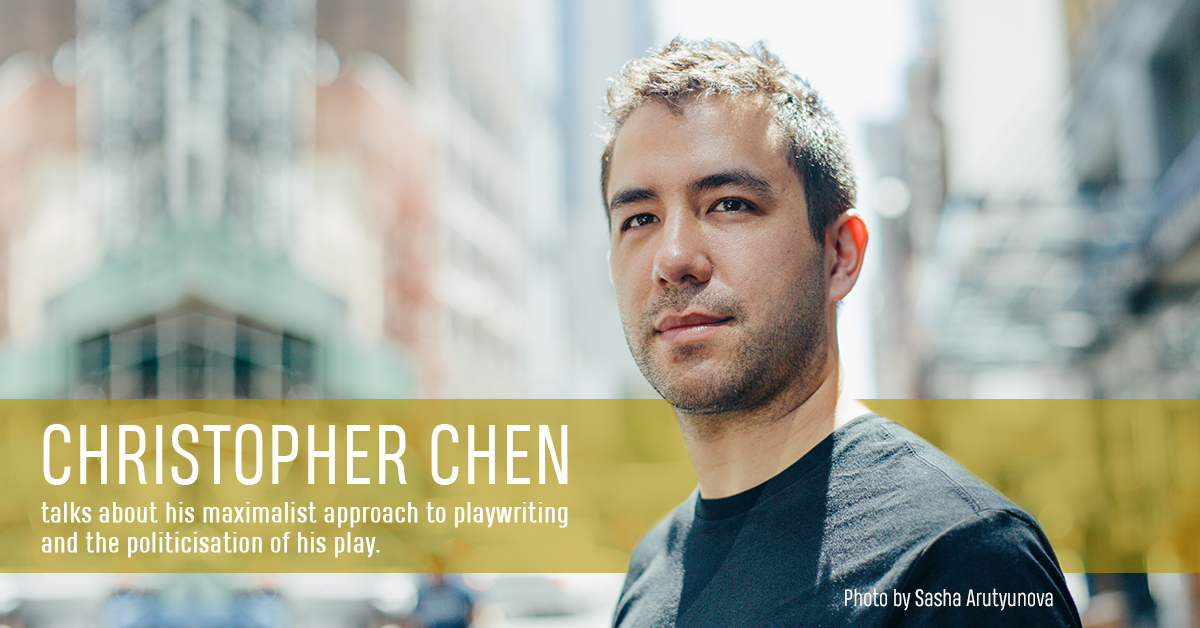 Playwright Christopher Chen shares how his identity influences his writing

Christopher Chen is an Obie award-winning playwright. His play CAUGHT was praised as “an intricately constructed, unrelentingly destabilizing puzzle of a play” by The New York Times. His plays examine the hidden patterns beneath complex systems: socio-political systems, psychological systems, systems of power. Read more to find out about his maximalist approach to playwriting, and how his identity influences his writing.

One of my chief interests as an artist is exploring the theme of perception; specifically, the extent to which our individual pockets of perception create unique worldviews and conceptions of what is true. When I started writing the play, I was particularly interested in how the internet exacerbates our shaky relationship with truth by creating “filter bubbles" that narrow the scope of our experience. In an alternate history, the multitudes of points of view on the internet could have expanded our consciousness, making us able to see the contours of the bubbles we live in; but instead, we’ve become more isolated, and our isolation has been weaponized by people like Donald Trump, who create battlefields between bubbles. With CAUGHT, I wanted to go in the opposite direction, to see if I could create an exercise where the audience could step back and see the bigger picture,see  the contours of their own bubbles, as mentioned mentioned above. One of my favorite quotes from a review said that the play demonstrates how there is a "frame around every fact." This is indeed a play about frames.

I’ve always had a complicated relationship with my ethnic and cultural heritage, because I am half and half. On the one hand, I very much identify with my white side, culturally. But at the same time, I also identify as Chinese American. Because of that, a lot of my work deals with the shifting perspectives of one culture to another: American perceptions of China and the Chinese, and the Chinese or Chinese-American journey through America. Being Chinese American is particularly strange, because there is a sense of connection yet alienation to a motherland many of us-- like me-- don’t have extensive experience with. A lot of my work deals with these dynamics. With CAUGHT, I was actually interested in questioning how much ownership I have over China as a subject matter, given that my identity is so fluid and mixed. If I write about China—well, can I do that? I’m not from China, so that’s multiple degrees removed from the actual country where my dad is from. I have genuine questions about what the right way of engaging with other cultures is, but I think that fits into a larger question of what your surface reality is, and how other cultures, among many other things, combine to form a very specific world view.

Entering college, I knew I wanted to be an artist, but didn’t know what kind. I had dabbled in fiction, poetry, filmmaking and music composition, but didn’t know which medium to commit to. Then I discovered theater, and in playwriting in particular, I felt like I stumbled onto the medium that combined all other mediums. Playwriting allowed me to combine literary sensibilities with musicality with visual spectacle. It allowed me to explore issues of social justice and develop my comedic impulses all at the same time. I could have it all! But apart from artistic hedonism, my impulse to combine has deeper roots: the fundamental worldview beneath all my work, the grand unified theory that I continue to explore, as an artist and as a human being, is the interconnectedness of all things. My plays often hinge on the notion that the most intimate nuances of personal loss or insecurity ripple through society, and are seeded in our largest globalized social movements. There are fundamental links between social issues, spirituality, history and psychology. It is the nature of these linkages I tackle in my work. In other words, the scope of the piece is itself the point. The world has scope. Issues have scope. All of this, combined, is what I mean when I say I like to create “maximalist” plays.

Firstly, I think there has always been tension between the U.S. and China. I think America has always been in this strange place of being in awe of and being absolutely threatened by China as an idea. I hope the play will not be politicized, if by politicized you mean people will think it is propaganda for a certain side. The main value the play is advocating for is the cultivation of an alert and questioning state of mind when dealing with social issues. The play purposefully shifts its point of view, including any solid notion of its ultimate purpose, so that the audience is ultimately unmoored from any consistent mind frame they can rest in, relax in. The hope is to challenge the audience to really come to grips with what their own opinions and preconceptions are, as the subject matters unfurl before them. This represents what I call a 50/50 experience: The play offers one half of the experience, the conversation starter, and the audience needs to meet it and provide the other fifty percent of the experience; namely, their own free thinking and reaction. This is the opposite of politicization.

My current project is a play called The Headlands at Lincoln Center (LCT3). It is a modern day noir about a man journeying into his childhood memories to solve his father’s murder. It is set in San Francisco, where I live, and is inspired by film noirs that are also set in the city. The play itself is half play/half movie, in that it involves huge amounts of videography and projections, as if we’re watching a movie being created before our eyes.

Christopher Chen’s CAUGHT will be playing at Miaja Gallery, 10 Sep – 6 Oct.
Click here to find out more about The CAUGHT Experience.