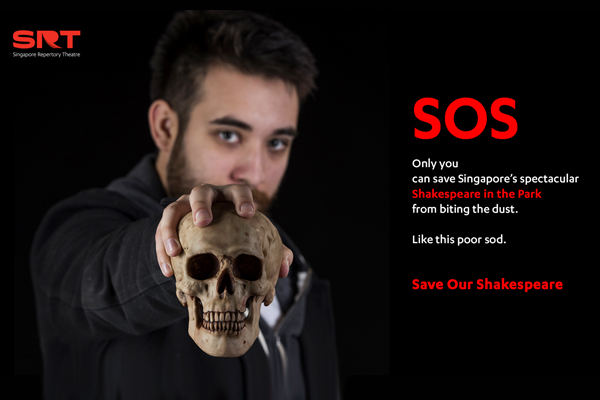 To be, or not to be... that is the question. Can Shakespeare in the Park live on with a new funding model?

For over 10 years, Singapore Repertory Theatre has staged 9 of Asia's largest Shakespeare in the Park productions, enthralling some 250,000 people at the magical atmosphere created at Fort Canning Park. But it’s an expensive business staging theatre productions in Singapore and a constant struggle in a world of decreased government funding and corporate sponsorship. Add to that rising production costs and stagnant ticket prices and it soon becomes apparent why companies such as Singapore Repertory Theatre (SRT) are looking for additional ways to raise much-needed funds.

With the ever increasing gap between hefty production costs and box office takings, SRT is appealing to its fan base to “Save our Shakespeare” (SOS) with a fundraising campaign to raise S$100K. In a series of images designed to capture audience’s imagination, SRT is appealing for individuals to step up to fill the void left by government and corporate sponsorship by making a donation to help bring this iconic production back to Singapore in 2018. SRT hopes that its community will come together to save an icon from meeting the same fate as so many of Shakespeare’s protagonists.

“It was a hard decision not to go ahead with Shakespeare in the Park in 2017, but having made a loss for the last few years and with traditional funding sources not forthcoming, we decided that it just wasn’t viable for us this year” said Charlotte Nors, Managing Director of SRT. “As a charity we can only absorb so many losses so our hope with our SOS fundraising campaign is to raise awareness of the funding challenges we face and to ask our audience to step up to support our efforts to keep Shakespeare alive for years to come.”

In striving to make Shakespeare in the Park accessible for all, SRT have staged contemporary versions that have increasingly pulled in new theatregoers, thereby unlocking the magic of the “Bard” for a wider audience. Each year sees 30,000 people attend and by offering reduced ticket prices for student from schools in Singapore and across the region, the show pulled in 10,000 students in 2016 alone.

As well as providing an incredible learning platform, a production of this size also creates considerable employment with over 100 individuals involved in 2016’s production from local acting talent to production crews to F&B staff. The quality of the set, the talent of the actors the unique setting and the extra touches of delicious food and drink are what make this a magical experience for audience goers.

If leading world cities such New York, Sydney and London have Shakespeare in the Park, shouldn’t Singapore?