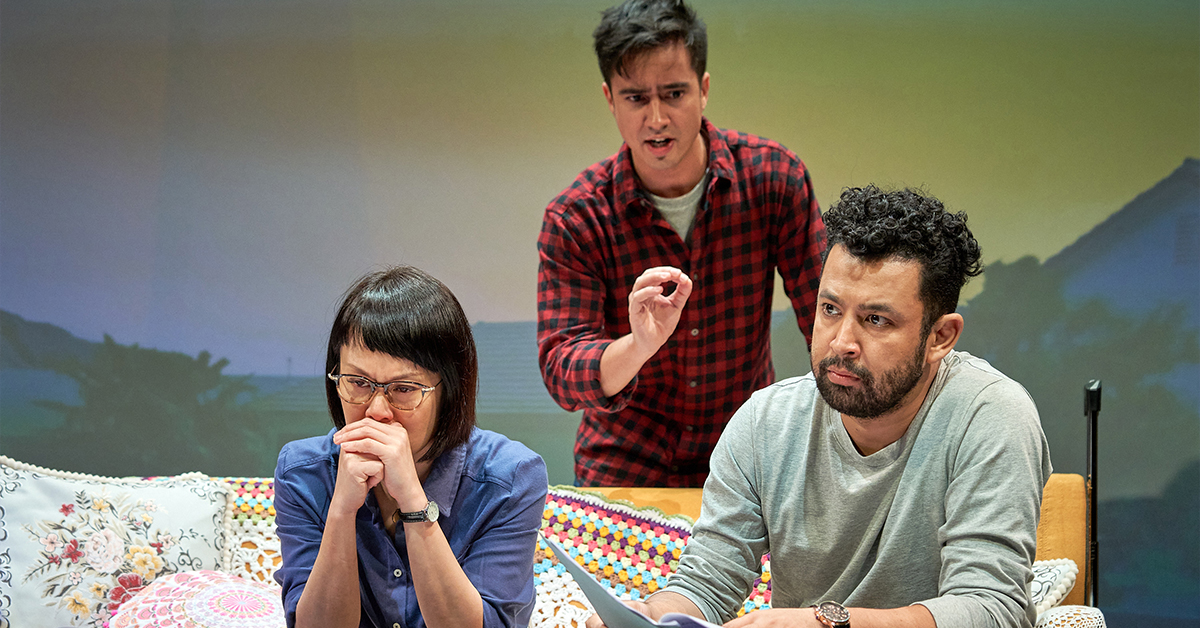 Audience Review: The Pursuit of Truth

(*The truth is never pure and rarely simple)

In today’s world of fake news, POFMA and more, is it becoming more difficult to discern what is true and what is not?
And how do we decide which “truths” to accept or which to reject?

That’s what makes The Lifespan of a Fact such a timely piece of theatre.

The Lifespan of a Fact is an SRT production, which is directed by Daniel Slater and written by Jeremy Kareken, David Murrell and Gordon Farrell.  The play is about “poetic truth” versus facts. John D’Agata is a journalist and essay writer. D’ Agata submits a poignant piece entitled “Love and Death In Las Vegas” to a magazine for publication.  The magazine editor, Emily Penrose, decides that the essay is just the boost the magazine needs. Emily hires Jim Fingal, an enthusiastic intern and Harvard graduate, as a fact checker.  Jim is a pedant with something to prove, so he goes through John’s essay with a fine toothcomb and discovers it’s riddled with errors and so-called facts, which are impossible to verify.  This is a serious problem as left unchecked; these errors could not only undermine the impact of the essay but also the reputation of the magazine and its editor.

Jim proves to be the ultimate fact checker and is pedantic to a fault. He is thorough and as a result, he expands D’Agata’s original 15-page essay to 130 pages. To us, some of the discrepancies may seem trivial, ludicrous even, for example, the colour of bricks (red or brown?), the number of strip clubs in Las Vegas (31 or 34?), was there really a traffic jam and even more bizarre, was a woman who beat a chicken in a game of tic-tac-toe really from Mississippi?!  Why bother and who’s going to know anyway? But Jim is very eloquent when he makes a powerful point about how the Internet has turned us all into “experts” and how social media (and the trolls) can easily destroy careers and bring down publications. John has opposing viewpoint, more concerned about the “poetry” and rhythm of the piece, the style and artistic integrity. He does not want to lose this to a few, what he considers, small inaccuracies and half-truths.  The editor, Emily Penrose, is caught in-between these two opposing viewpoints. 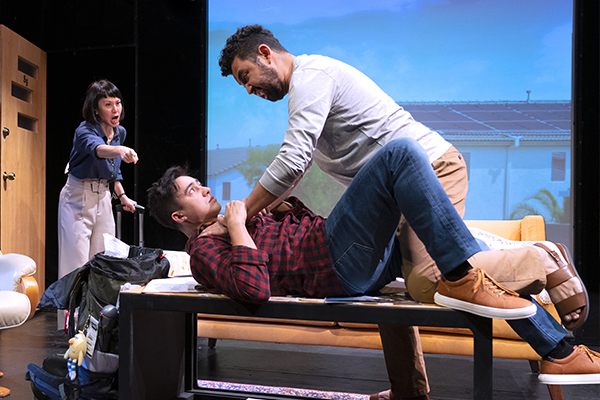 So the three characters in this play, Emily Penrose, John D’agata and Jim Fingal move round a tight circle of facts, half-truths and untruths.  Watching the characters argue, negotiate and the tension between them makes for an absorbing and entertaining drama.  The play was 90 minutes without an interval and I did not even notice the time passing.  The three actors – Ghafir Akbar (John), Janice Koh (Emily) and Jamil Schulze (Jim) were really great.  I especially enjoyed Jamil’s performance as the young intern, fresh out of Harvard, with a point to prove.  Ghafir was the cool contrast to Jamil’s enthusiasm and Janice the down to earth editor and voice of reason.

But at the end of the play, the three put their egos and differences aside. In their pursuit of perfection and the “truth”, have they lost sight of what the essay was really about, i.e. the suicide of a sixteen year old?

I loved the set design (by Sam Wilde), which divided up the space on stage so efficiently.  The background digital screen (by multimedia designer Genevieve Peck) provided a great visual by showing different locations and night/day but it did flicker from time to time, which was a little distracting.

I saw the play on Saturday evening, 29th Feb.  I was heartened to see the theatre almost full and am thankful that people made the decision to spend an evening out with fellow theatre lovers.  One of my party commented afterwards that the play was rather “wordy” but that’s what I loved about it.  The writing was sharp, the words were well chosen and it was witty.  Who would have thought a play about fact checking could be so entertaining?  I hope more of the public catch this production to find out.